China’s enforcement of a new security law in Hong Kong marks the de facto end of the “one country, two systems” model that came into effect following the British handover in 1997. This has repercussions that go far beyond Hong Kong.

The Sino-British Joint Declaration, signed by both China and the UK in 1984, paved the way for the handover. It states clearly that the territory shall enjoy “basic rights and freedom” and “a high degree of autonomy” for 50 years – until 2047. The treaty was lodged with the UN and so any breach of it is a breach of international law.

Arguing that the new security law prematurely removed Hong Kong’s high degree of autonomy, the UK proposed a pathway for an estimated 3 million Hong Kongers to gain British citizenship. China was quick to assert that this decision breached the terms of its agreements with the UK.

The Chinese government has made no secret of its contempt for the joint declaration in the past, deriding it as nothing more than a simple historical document. However, a number of China’s other territorial claims could equally be brought into question using the very same logic. China’s sovereignty over Tibet, for example, is rooted in international law governing the succession of states, which China claims makes it the successor state to the Qing government that signed the Anglo-Chinese Convention of 1906.

Claims by China that Taiwan should be “reunified” with the mainland rest partially on its interpretation of the 1951 San Francisco Peace Treaty, which stipulates that Japan is to renounce all right, title and claim to Formosa (Taiwan) and the Pescadores (Penghu). China’s claims over the Senkaku/Diaoyu islands in the East China Sea – which are disputed between Japan, Taiwan and China – are also based on the 1943 Cairo and 1945 Potsdam declarations, which declared that Japan should return all of its occupied territory at the end of the war.

All this means that China should be careful its neighbours don’t take such a dismissive approach to these historical treaties as it has done with the joint declaration.

But something more nuanced is happening in China’s foreign policy towards both friends and rivals than just a rejection of a historical agreement. Recent deadly clashes along the border with India in the Himalayas, attempts to shift the parameters of the Senkaku/Diaoyu dispute with a near-continuous presence around the islands, and continuing moves to strengthen its control of the South China Sea all point to a conscious shift in China’s behaviour.

What really matters, it would seem, is China’s relative power in the international system – both against its neighbours in the region, and the wider world. It’s likely that Chinese officials see this as a chance to shift the parameters of operations in a number of areas while the US is distracted domestically by COVID-19 and led by a non-internationalist president. 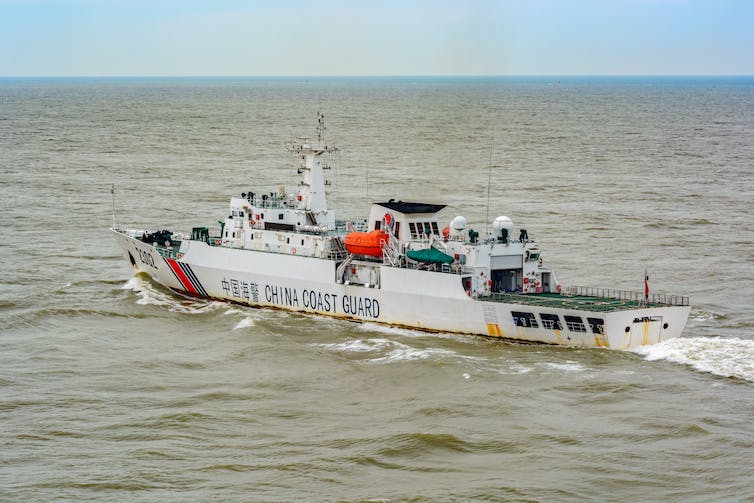 A Chinese patrol boat in the East China Sea in 2017. Igor Grochev/Shutterstock

Since the new security law makes secession, subversion, terrorism and foreign intervention illegal in Hong Kong, it has certain spill-over effects. Not least is the issue of extradition, which is a controversial issue in Hong Kong. A proposed new extradition bill sparked mass protests in Hong Kong in June 2019 in which nearly 2 million people took to the streets, over fears people could be extradited to China.

The period of terror that is enveloping the island would mean that those commenting on issues of independence for Hong Kong run the risk of breaching the new security law outside of Hong Kong’s territory. It’s possible that even this article might fall foul of it.

This brings into question the other extradition agreements that Hong Kong has with 30 countries, most of whom do not have similar arrangements with mainland China. Canada was the first to suspend its extradition treaty with Hong Kong in early July 2020 and Australia followed suit a few days later. These countries are right to respond to such a danger to their citizens and residents.

Others with such agreements include the US, New Zealand, the UK, Germany, Singapore, Malaysia and India. It’s likely only a matter of time before others make similar decisions.

China’s actions in Hong Kong are symptomatic of its changing outlook and attitude to its neighbours. The days of taoguang yanghui – the approach taken to foreign policy under Deng Xiaoping in the late 1970s and 1980s that is frequently translated as “keeping a low profile” – are already long gone. However, a clear willingness to disregard international treaties in this way shows that China now has the confidence and courage to challenge the status quo of the international system.

The global reaction indicates that this will not be left unanswered, laying the groundwork for an increasingly difficult relationship between China and other world powers.