In Sri Lanka, bushmeat poachers haven’t let up during lockdown

COLOMBO — The killing of a young forest ranger by suspected poachers has underscored that illegal hunting in Sri Lanka, and the bushmeat trade it feeds, hasn’t stopped during the lockdown imposed in response to the COVID-19 pandemic.

Pradeep Bandara, 25, was shot dead on April 22 while leading his team on an anti-poaching raid in Gal Oya National Park in eastern Sri Lanka. 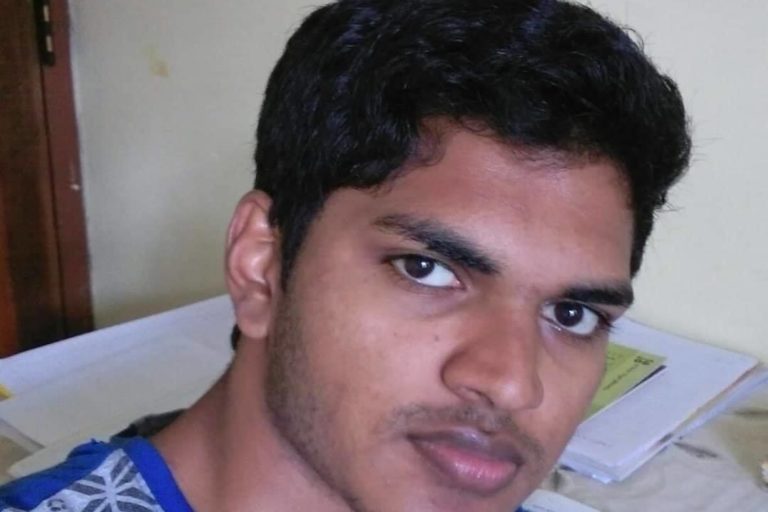 Twenty-five-year-old wildlife ranger Pradeep Bandara was killed on April 22 by poachers in Gal Oya National Park in eastern Sri Lanka while on patrol as the country remained under a COVID-19 lockdown. Image courtesy of the Department of Wildlife Conservation (DWC).

Acknowledging the ranger’s death as a loss to the department, Chandana Sooriyabandara, the Department of Wildlife Conservation’s director-general, told Mongabay that anti-poaching operations had continued throughout the national lockdown period to protect the country’s unique and often threatened wildlife.

In April alone, the department conducted 123 raids through its 156 field stations, a five-fold increase from the same period last year. Most of the raids uncovered poaching activities, though there were also other environmental crimes, including illegal farming in protected areas, Sooriyabandara said.

He said that while the numbers do not indicate a clear increase or decrease in poaching within nature reserves during the lockdown, the surge in patrolling activity has helped nab suspects.

“In a normal day, wildlife officers have to manage wildlife tourism-related activities and attend meetings. The lockdown released officers from such engagements and we could get them to conduct anti-poaching activities,” Sooriyabandara said. 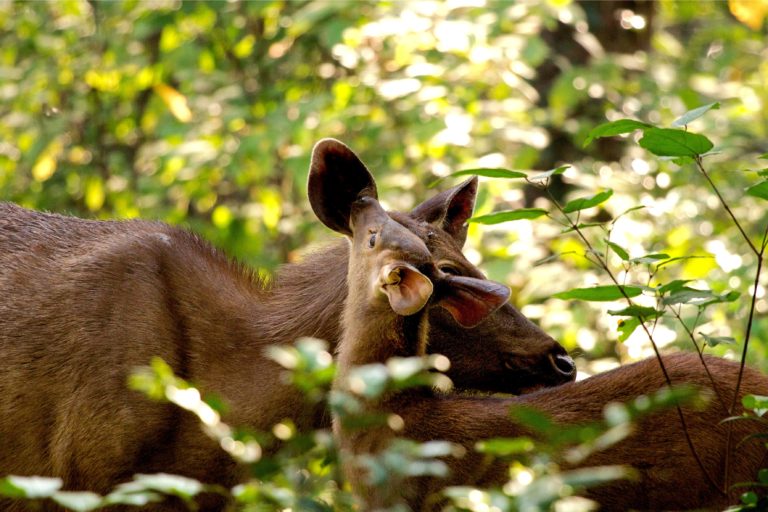 A sambar deer fawn with its mother. Sambar deer (Rusa unicolor) are another species prized by bushmeat poachers. Image courtesy of Rajiv Welikala.

Poachers’ main targets are large game animals such as wild boar (Sus scrofa), spotted deer (Axis axis) and sambar deer (Rusa unicolor). The common methods employed to kill them are shooting, setting of trap guns and wire snares. Jaw exploders, locally known as hakka patas, are small improvised devices that explode inside the mouth when an animal chews on them — a grisly method that’s a new favorite among poachers.

The poaching for bushmeat is driven largely by demand from domestic tourists visiting areas near wilderness sites, who often seek out wild meat as an exotic delicacy. But the lockdown has effectively dried up this market, meaning the driving force during this period is likely subsistence hunting.

“Poaching is possibly carried out largely to cater to local demand, the second market for bushmeat in the island,” said Sumith Pilapitiya, a former director-general of the DWC. “Considering we had curfew throughout Sri Lanka for weeks and travel restrictions were in place with police checkpoints, transporting wild meat was difficult. While local community consumption is a reaction of the real market, it still seems considerably high.” 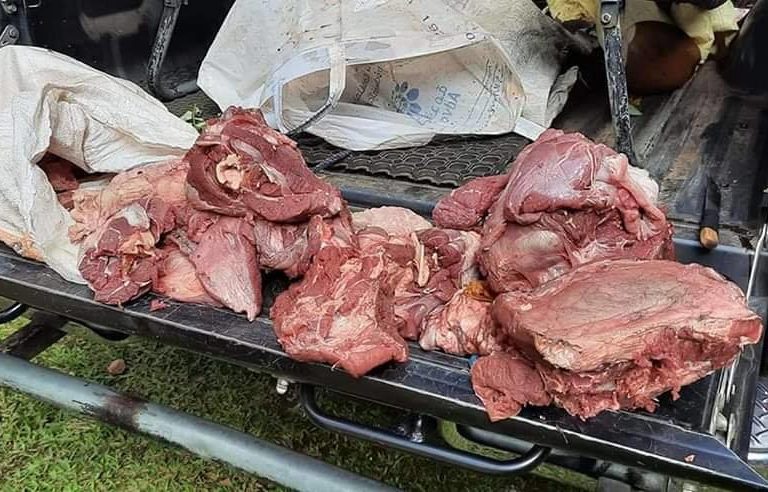 Sambar meat confiscated while being transported. Image courtesy of the Department of Wildlife Conservation (DWC).

Bandara’s death has prompted calls for authorities to take a tougher line on poachers, including drafting in the military for anti-poaching activities.

The DWC has 1,200 field staff dedicated to tackling illegal activities across a network of protected areas that span a combined 12% of Sri Lanka’s total land area, which experts and authorities concede is an insufficient number of staff.

In the aftermath of Bandara’s death, the government has offered the support of the military to the DWC to step up anti-poaching operations. The military’s Commando Regiment, Special Forces and the police’s Special Task Force (STF) already assist in joint patrols with the DWC in the main national parks such Yala, Udawalawe, Galoya and Maduruoya where the incidence of poaching is high and more boots are needed on the ground, Sooriyabandara said.

“Whenever we wanted, we have sought and received the support of both the army and the STF,” Pilapitiya said.

He recommended drawing inspiration from the system adopted by the Kenya Wildlife Service (KWS) in the 1980s, in which a regiment from the military was seconded to the agency together with the regiment’s commanding officer. This regiment collaborated with KWS staff in carrying out anti-poaching operations, and its commanding officer was accountable to both the military and the KWS head.

“It is possible to adopt a similar model here with the Special Forces or the STF,” Pilapitiya told Mongabay. 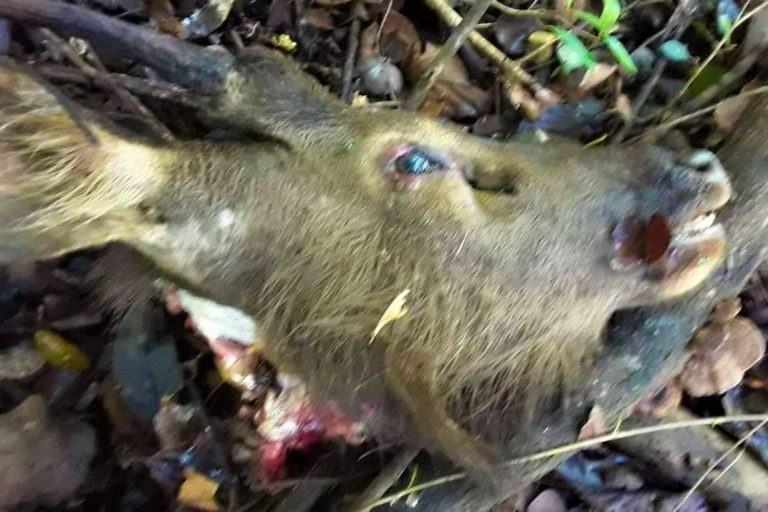 But other experts have misgivings about allowing a heavy military involvement in tackling wildlife-related crimes.

“The best solution is to empower the DWC by increasing manpower, allocating more resources and offering training,” said Jagath Gunawardana, a renowned environmental lawyer and independent environmental activist. “Military has its own identity and scope of work. The need is to strengthen the department to effectively conduct operations.”

He recommended increasing the number of DWC field staff six-fold, employing 6,000 new field officers. The rangers’ equipment needs upgrading too, Gunawardana said. “Wildlife officers use shotguns while some poachers use modern weapons,” he said, adding that the fact that poaching has continued throughout the strict lockdown, with bushmeat sold in villages, reflected a failure of law enforcement. 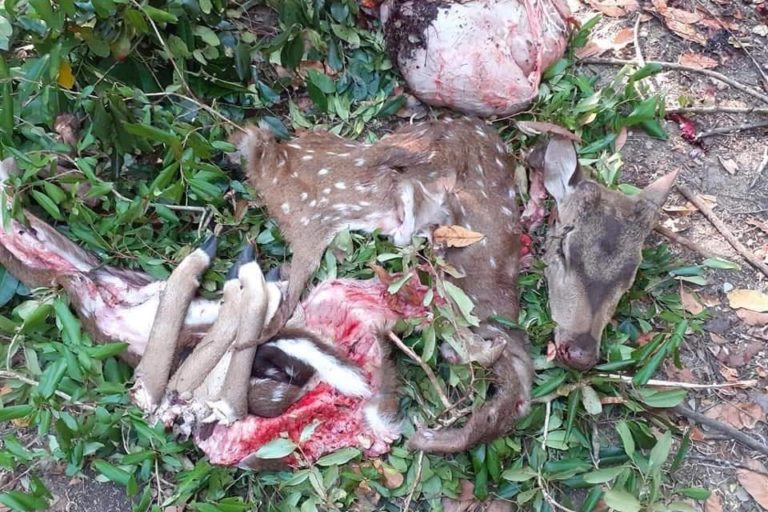 This spotted deer was killed on March 23, a week after Sri Lanka imposed an islandwide curfew to contain the spread of COVID-19 in the Indian Ocean island. Image courtesy of Dilahan Kavinda.

Enforcement efforts to tackle the bushmeat trade from the supply side should be coupled with a campaign to curb the demand, said Sarath Kotagama, an emeritus professor of ecology who served as DWC’s director-general from 1989-1990.

“The public perception that COVID-19 spreads by virus jumping from animals to humans creates a window for reducing the demand for wild meat. It raises a general concern about deceases linked to the consumption of wild meat and people will consider it is not healthy to consume wild meat,” he said. “This message needs to be strategically communicated to the public which can, in turn, reduce the demand.”

Banner image of a herd of chital, also known as spotted dear, in a national park in Sri Lanka, courtesy of Rajiv Welikala.

The article was originally published on Mongabay. You can read it here.