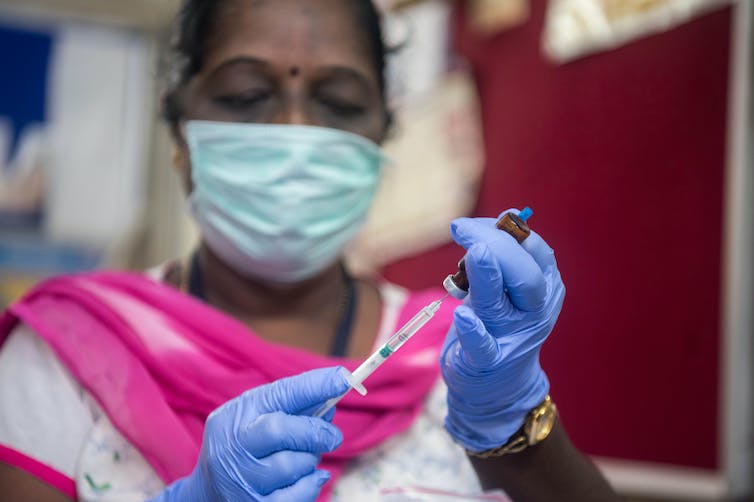 The great COVID-19 vaccine race is on. Pharmaceutical companies around the world are going head to head, while governments scramble to get priority access to the most promising candidates.

But a richest-takes-all approach in the fight against the deadliest pandemic in living memory is bound to be counter productive, especially for the recovery of low and middle income countries. If governments cannot come together to agree a global strategy, then the global south may need to pin its hopes on the manufacturing might of India.

Tedros Adhanom Ghebreyesus, the director general of the World Health Organization, has warned that a nationalist approach “will not help” and will slow down the world’s recovery. Yet vaccine nationalism looms large over the search for vaccines, with the US, the UK and the European Commission all signing various advance purchase agreements with manufacturers to secure privileged access to doses of the most promising candidates. The US alone has paid over US$10 billion (£7.6 billion) for such access.

The ideal global distribution of a successful COVID-19 vaccine would look beyond which countries have the deepest pockets and instead prioritise health workers, followed by countries with major outbreaks and then those people who are particularly at risk.

India has the potential to play a key role in overcoming vaccine nationalism because it is the major supplier of medicines to the global south. Médecins Sans Frontières once dubbed the country the “pharmacy of the world”. India also has, by far, the largest capacity to produce COVID-19 vaccines. Its role in manufacturing a vaccine could come in two different ways – mass-producing one developed elsewhere (likely) or developing a new vaccine as well as manufacturing it (less likely, though not impossible).

India’s Serum Institute has already started manufacturing the University of Oxford/AstraZeneca vaccine candidate before clinical trials have even been completed. This is to avoid any subsequent delay if the vaccine is approved. It is seen by many, including the WHO’s chief scientist, as the world’s leading prospect.

Serum Institute, based in the western city of Pune, is the largest vaccine manufacturer in the world and has a deal to supply 400 million doses by the end of 2020 (1 billion in total). It has also inked a deal for the manufacturing and commercialisation of American firm Novavax’s COVID-19 candidate.

Another Indian pharma company, Biological E (BE), has agreed to manufacture the vaccine candidate of Johnson & Johnson’s subsidiary, Janssen Pharmaceutica NV. The Hyderabad-based firm has since announced its acquisition of Akorn India in order to boost its manufacturing capacity.

Despite India’s success in mass manufacturing, the transition to innovation and new product development has been more of a struggle. Nevertheless the Serum Institute, Aurobindo Pharma, Bharat Biotech, BE, Indian Immunologicals, Mynvax, Panacea Biotech and Zydus Cadila are all attempting to develop their own vaccines.

Bharat Biotech’s Covaxin has attracted the most attention and controversy. The Indian Council of Medical Research wrote to a number of hospitals seeking their help in fast-tracking the clinical trials of the drug, which was developed in collaboration with the National Institute of Virology. The aim had been to launch it by August 15 (Indian Independence Day). Despite the feasibility of that timeline being widely questioned, trials of Covaxin did begin in Delhi on July 15.

Who gets the vaccines?

Uncertainty reigns over who will get these vaccines manufactured in India – and there have been very mixed messages. Regarding the much-hyped Oxford/AstraZeneca vaccine, Adar Poonawalla, the Serum Institute’s CEO, said, “a majority of the vaccine, at least initially, would have to go to our countrymen before it goes abroad”.

Vaccine diplomacy may come into play, as indicated by India’s foreign minister, Harsh Shringla, on a visit to Dhaka. He promised that India would supply vaccines to Bangladesh on “priority basis”, stating that India’s “closest neighbours, friends, partners and other countries” will receive privileged access.

Meanwhile, a recent agreement provided a firmer guarantee of Serum-Institute-produced vaccines being supplied outside of the country – at least in 2021. On August 7, Gavi (the global vaccine alliance) announced a collaboration with the Serum Institute and the Bill & Melinda Gates Foundation. The deal provides US$150m of financial support for the Serum Institute to manufacture and supply 100 million doses of vaccines to the COVID-19 Vaccine Global Access Facility (COVAX) for distribution in low and middle-income countries in 2021.

With almost 18% of the world’s population, India has strong demand for COVID-19 vaccines. Export bans on some personal protective equipment and key medicines in March set a precedent for prioritising supply to India first. But the bans were short lived and exports continued.

Thanks to its vast manufacturing capacity, India will undoubtedly export vaccines, continuing its role as the “pharmacy of the developing world”. Vinod Paul, chair of India’s National COVID-19 Task Force, has spoken openly of his desire to see India play a global role, saying: “The vaccine is not just for India and Indians but for the world and humanity.” The question is when. Many in low and middle-income countries will undoubtedly be hoping it will be sooner rather than later.