Kaavan, a Sri Lankan elephant living in captivity in a Pakistani zoo to be set free

COLOMBO, Sri Lanka — Kaavan, a 35-year-old male elephant (Elephas maximus maximus), is finally set to end his captivity inside a poorly maintained zoo in Pakistan after a historic court order on May 22 by the Islamabad High Court. The court ruled that the elephant be relocated from the Islamabad Zoo (previously known as Marghazar Zoo) to a sanctuary where he can roam free. As Pakistan does not have a suitable place for the elephant to be released, Pakistani authorities selected an elephant sanctuary in Cambodia to be Kaavan’s new home.

Born in 1985, Sri Lanka offered Kaavan to Pakistan to strengthen bilateral relations between the two countries. This custom has drawn criticism because it deprives elephants of the right to live freely.

In 1990, Kaavan did get a mate named Saheli. But after Saheli’s death in 2012, Kaavan grew lonely and became known as “Pakistan’s loneliest elephant.” Soon, he began showing signs of boredom, lethargy, stress, and, later, aggression, leading his keepers to chain him briefly.

Based on reports that the elephant was kept in less-than-ideal conditions, activists around the world, including the pop icon Cher, campaigned for Kaavan’s release beginning in 2016. A petition demanding that Kaavan be freed was signed by more than 400,000 people from around the world. In late May 2020, a Pakistan court ruled that Kaavan be released from the zoo to the delight of animal rights activists. The Cambodian elephant sanctuary is home to dozens of elephants rescued from captivity, and experts consider it a suitable place for Kaavan to live. 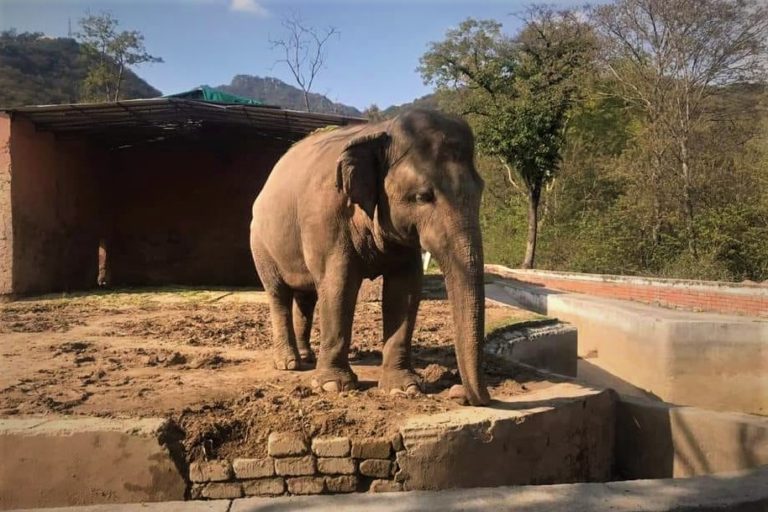 Kaavan, the Sri Lankan elephant at the Islamabad Zoo in Pakistan. Image courtesy of Friends of Islamabad Zoo.

Chris Draper, head of animal welfare and captivity at the Born Free Foundation, said that, while it is good news that Kaavan is set to leave the zoo, care must be taken with what happens next. “Any sanctuary must be a genuine sanctuary, where he will enjoy space, appropriate care, the company of elephants as appropriate and a life free from chaining,” Draper told Mongabay. The Born Free Foundation is an international wildlife NGO that campaigns to “keep wildlife in the wild.”

The logistics of moving an elephant from Pakistan to Cambodia are likely to be complicated and highly stressful for Kaavan, and this needs to be weighed carefully against the net benefit to his welfare, Draper added.

Experts like Draper agree that Kaavan’s living conditions at the Islamabad zoo are woefully inadequate, as they are for many elephants in captivity around the world, especially those in zoos and circuses. Elephants are complex, wide-ranging and highly social animals, and their natural behavior and ecology is affected by the conditions in which they’re held, Draper said. 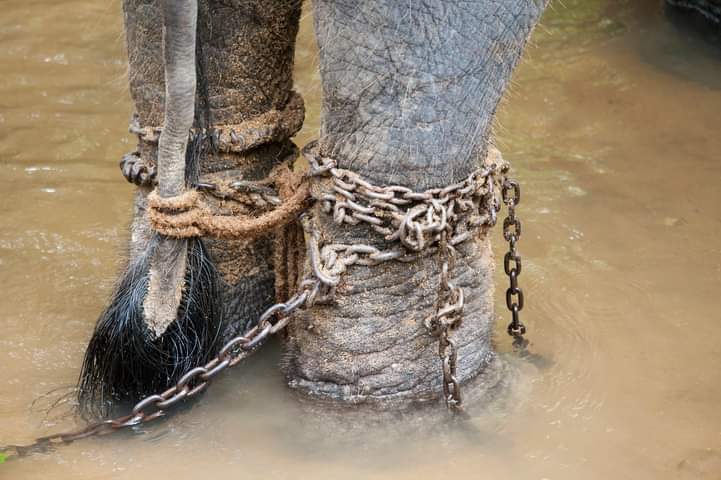 Most of Sri Lanka’s captive elephants are kept in chains throughout their lives. The chains restrict their movements and often cause injuries. Image courtesy of Deepani Jayantha.

Shermin de Silva, a Sri Lankan biologist who studies the social behavior of elephants, said that the introduction of Kaavan to an elephant sanctuary and to the other elephants living there should be done with sensitivity, care and caution. Preferably, the change should be gradual, allowing the animals to get to know one another with restricted contact and limits on how much interaction they have at first. The process also depends on Kaavan’s personality, de Silva told Mongabay.

De Silva says that elephants need to form bonds with other elephants and should not be kept alone. “Keeping a social animal like [an] elephant in captivity is like putting a human in solitary confinement. Humans are social animals in the sense that we need interaction with other humans to maintain our physical and mental health, similar to many other primates. Deprivation of social interactions is a form of trauma, or one might even say torture,” she said. Similarly, elephants are social animals and require near-constant contact with other elephants for their well-being. Even bull elephants, though they are considered more solitary than female elephants, need these relationships, she added. 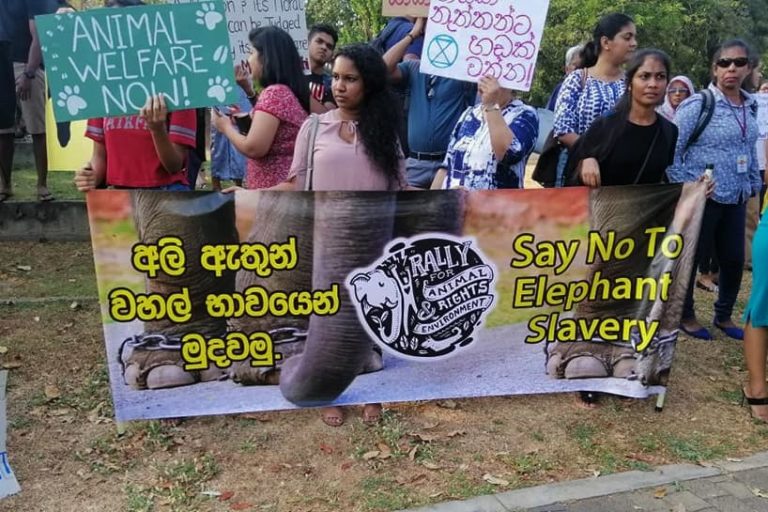 Animal welfare activists in Sri Lanka have been campaigning for the release of elephants in captivity. Image courtesy of Rally for Animal Rights & Environment.

Sri Lanka has captive elephants at privately run and government-operated zoos, giving rise to concerns about the welfare of these animals in captivity.

However, elephants have always been an integral part of Sri Lanka’s cultural practices, and ancient kings used elephants in warfare and to lift heavy loads.

Historical accounts show that Sri Lanka has exported elephants as gifts to other countries for centuries. To this day, elephants remain prominent in religious and civil ceremonies, often highlighted with a caparisoned tusker bearing a casket carrying Buddhist relics during the Kandy Pageant, a well-known religious event.

Despite such traditions, concerns remain about how captive elephants are managed in Sri Lanka. “While much has been said about chaining Kaavan, every single captive elephant in Sri Lanka is chained,” said Prithiviraj Fernando, an elephant biologist who heads the Centre for Conservation and Research. Elephants are often trained with cruel methods involving heavy beating and the use of bull hooks so they obey their mahouts.

Even after their training, elephants typically have all four legs chained together so that they can only shuffle along when walking, severely restricting their natural gait. They are also only a jab away from the pointed bull hook, or ankus, of their keen-eyed mahouts, as the elephants’ training is usually insufficient to provide a high degree of trust and control. Fernando told Mongabay that humane methods of training need to be introduced. If elephants were better trained from the beginning, they could be trusted with greater freedom without always being chained. 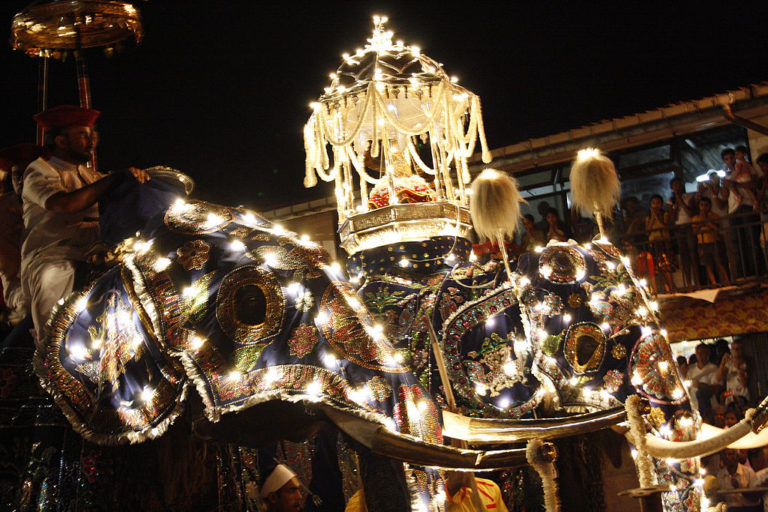 Sri Lanka uses captive elephants for religious and cultural events, such as the well-known Kandy Pageant, in which caparisoned elephants join in street processions with a chosen tusker carrying a golden casket bearing the tooth relic of Gautama Buddha. Image by Daniel Liabeuf via Wikimedia.

Perhaps the most important role of captive elephants is to serve as ambassadors for their wild brethren, Fernando said. A friendly elephant can kindle a sense of wonderment and love in a child that lasts a lifetime. Such feelings could translate into a desire to protect and conserve elephants in the future, he said.

But sadly, Sri Lanka holds the record for the highest number of Asian elephant deaths annually in the world, something that does not fit the cultural and religious significance accorded to the animals. In the past three years, elephant killings have increased from 200 to 300, and now to more 400 per year. Such statistics lead to questions about the elephant’s role as an ambassador, and they bring into sharp focus the island’s inability to handle its elephant population in the wild, not just in captivity, Fernando said.