[Explainer] Locust swarms in India: millimeters in size but millions in numbers

Alongside a global pandemic, India prepares to fight yet another battle for food security. Unlike the micron-sized virus, however, the new threat is millimeters in size but millions in number: the desert locust.

Amidst concerns of heatwaves and crop failure comes the desert locust, a migratory insect from eastern Africa and Southeast Asia. The multifaceted impacts of this pest are causing mass panic in an already tenuous situation, especially given its implications for future food security in India.

According to a recent report by the Food and Agriculture Organization (FAO), the locust swarm currently affecting parts of India, was responsible for crop infestation in 2,80,000 hectares across 13 countries prior to arrival in India. It entered India through the western state of Rajasthan on May 13, 2020. This year’s attack is the worst seen in 27 years and scientists predict that the crisis will increase as we enter monsoon season.

What are desert locusts?

Desert locusts (Schistocerca gregaria) are a short-horned grasshopper species. The FAO deems them the most dangerous migratory pests in the world due to their ability to change behaviour and form swarms that consume everything in their path. These swarms prefer arid or semi-arid areas for egg-laying and nymph development. During periods of low density, the locust inhabits a broad belt of arid and semi-arid land which stretches from the Atlantic Ocean to northwest India, spanning 16 million square km in 30 countries.

Locusts are voracious feeders, eating up to their body weight daily. They damage crops by devouring all parts of the plants and also by breaking trees by their sheer weight when they settle down in masses. These insects can fly up to 150 km daily and one square km of a locust swarm contains up to 80,000 adults that consume the equivalent food material to 35,000 people per day. According to the FAO, a solitary female lays about 95-158 eggs. Up to 1000 eggs have been found in a single square meter. 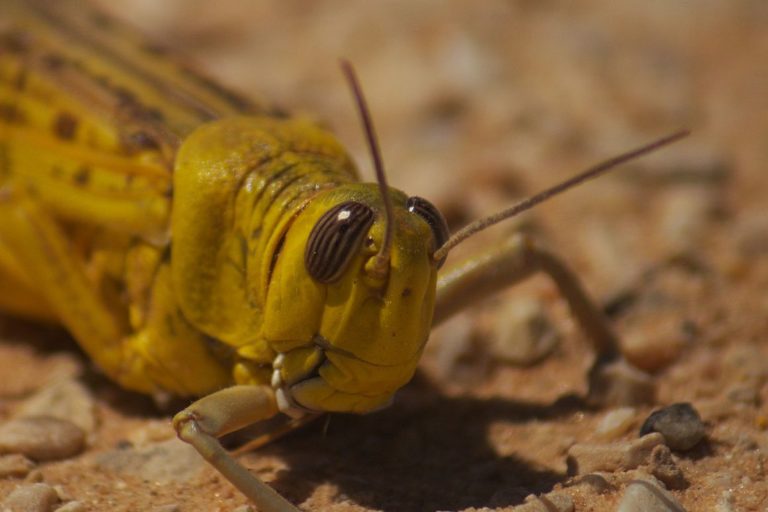 What is the impact of a locust swarm?

In terms of the environmental implications, locusts impact native grazing species that rely upon grasslands and croplands for survival. Swarms consume everything in their path, leaving behind ruined cropland and barren pastures. While they are not known to impact forests or natural tree cover, their voracious consumption of most species of crop creates food scarcity for native fauna and other insects. In Kenya, for example, locust plagues threaten the habitat of the Grevy’s zebra, a threatened endemic species.

The locust swarm also has economic and social impacts. The FAO reports the decadal economic impacts of locust plagues since the 1920s. Although no locust plague cycles have been observed after 1962, large scale upsurges were reported during 1978 and 1993 in India. Estimated damage was Rs. 2 lakh in 1978 and Rs. 7.18 lakh in 1993. In December 2019, the locusts destroyed over 25,000 hectares of crops in Gujarat.

In 2020, the locusts have already been reported to have destroyed crops in 18 districts of Rajasthan and 12 districts of Madhya Pradesh while crops in Uttar Pradesh, Punjab, Haryana, and Maharashtra are under threat of an attack. Given that locusts swarm just prior to the monsoon, this adds economic strain to a tenuous system that relies on the annual monsoon for crop success. Locust plagues also pose a threat to livestock grazers by turning grasslands into barren wastelands.

Locust plagues not only rob rural families of their livelihood and income but also take a toll on the lives of women and children. Children often leave school to help their families recover from losses due to locust swarms. Malnutrition was observed in children post-locust plagues, as locusts consumed the same fodder as domestic cattle, reducing the milk quality produced by the cattle and leading to food insecurity and malnutrition.

How do we manage a locust plague?

Potential management techniques for locust plagues include using wind as a marker, monitoring the swarms and their range expansion, and biological control for pest management.

Annually, the desert locust traverses most arid and semi-arid zones from parts of West Africa to eastern India. A recent short communication showed that wind speed acts as a catalyst in locust dispersal. With the help of meteorological studies, the speed and direction of wind flow (>20⁰C) can be monitored in India to predict the trajectory of locust swarms.

Recent events have indicated locust swarms extending their range towards Maharashtra more so than in previous years. Rapid monitoring systems should be developed to confirm such movement. In a 2016 study, researchers suggest an effective physical field monitoring protocol assisted with molecular detection and chemical pheromone monitoring should be implemented.

Climate change and its impact on the monsoon is thought to cause range expansion in locust swarms. Range expansion can be predicted using Species Distribution Modelling (SDM). SDM can show us the relationship between environmental variables (e.g. temperature, precipitation, greenness, soil moisture) and the dispersal patterns of locust swarms. Simultaneously, it can aid in predicting regions susceptible to future locust swarms, reducing the potential losses to agricultural communities.

Eradication or controlling a pest from an area comes with sets of challenges. The Locust Control and Research (LC & R) initiative by the Government of India addresses the impact of locusts in India.  LC & R uses traditional methods of controlling agricultural pests with extensive field monitoring and spraying infected areas with insecticides using Ultra Low Volume (ULV) sprayers. Recently, aerial ULV sprayers mounted on aircrafts were implemented and drones are being used for surveys and insecticide applications. The important part of executing these plans is the time of action. Research asserts that desert locusts can be controlled effectively if the control strategies efficiently applied from the beginning stages of the locust attack. 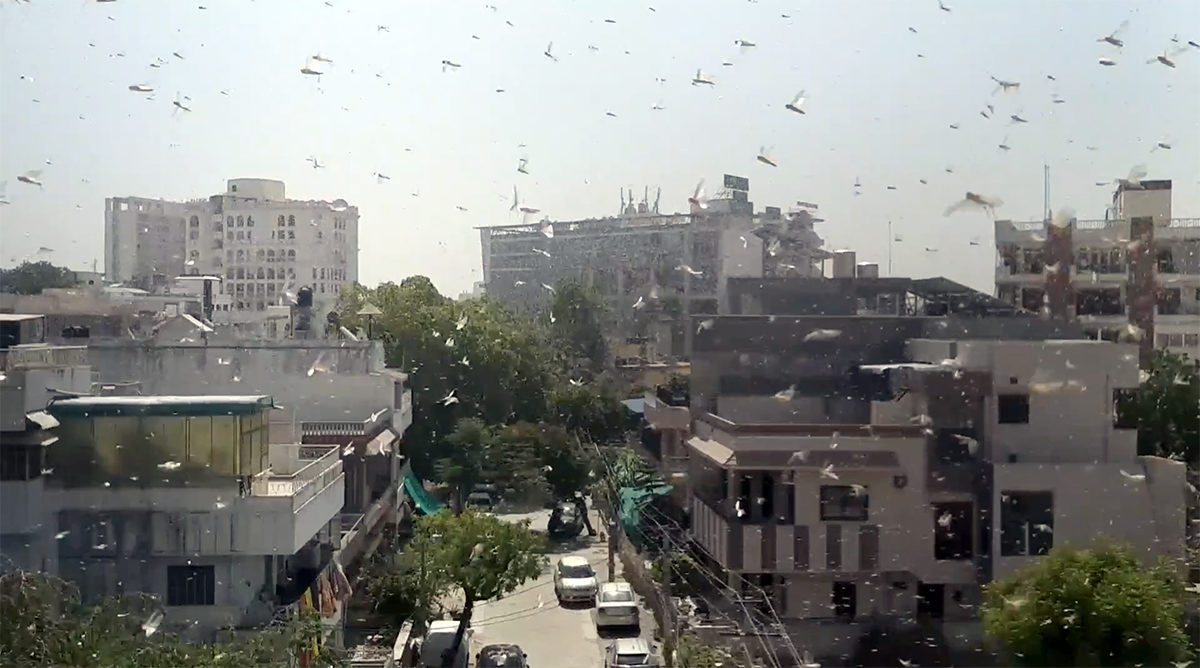 A swarm of locusts in Jaipur, Rajasthan. Photo by Nilanjana Lahiri.

In a research paper in 2010, Michel Lecoq recommended using Integrated Pest Management (IPM) against locusts. The author suggested the use of efficient biopesticides instead of traditionally used synthetic pesticides. Currently, pheromones and mycopesticides are considered effective as an IPM. Alternative pesticides should be cost-effective and efficient. At the community level, incentives must be provided to promote such alternative options and offset costs.

Pest management also utilises semiochemical based control methods including: (i) Mating disruption, a direct method used to distract the insects to go after mating; (ii) mass trapping of pests; and (iii) “lure and kill.” The latter two methods use specific olfactory cues, mimicking either food or sex pheremones, to attract pests into traps. A study supports mass trapping as a sustainable method of controlling pest populations.  The challenge with locust swarms is understanding their behavior and choosing the bait wisely.

Using biological control for pest management is widely recommended. In India, reports from 1879 mention that the most effective natural controls were native species of birds and insectivorous mammals, amphibians, and reptiles. Introducing the natural predator of the pest in other infected areas can also effectively control the pest population if no native predators are present. But this poses the risk of biological invasion of that exotic predator in an alien territory.

Locust management also needs an improvement of policies. Preventing and addressing the damage caused by locust swarms requires cooperation between vulnerable nations. Various government agencies have come together to predict, monitor, and respond to locust swarms, under the guidance of the FAO. Policies around pest control must be strengthened to allow for rapid response as well as updated warning systems regarding locust movement and conditions that support locust migration. While management and rapid response are key, resources must be allocated towards research on updated technology to mitigate and eradicate locust invasions. Monetary compensation and training support for affected farmers is essential. Ground forces must be trained to respond to locust invasions and assist local communities with latest technologies.

Is there a link between locusts and climate change?

The current locust swarm is thought to have originated in southern Iran due to the Indian Ocean Dipole, which caused warmer waters to its west and cooler waters to its east. Rising sea temperatures due to increased greenhouse gas emissions are expected to create more favourable conditions for locust swarms in the coming years.

The article was originally published on Mongabay. You can read it here.