MANILA — Whale sharks, the largest fish in the sea, are a fascinating and mysterious lot. Growing as big as 10 meters (33 feet) in length and diving as deep as 1,000 meters (3,300 feet), these gentle creatures normally dine on plankton and small fish.

Their pupping and reproductive behaviors remain a persistent curiosity among marine biologists, who have tapped new techniques to better understand their migration patterns and behavior.

Whale sharks crossing marine borders aren’t uncommon since these filter feeders are highly mobile, but studies that capture these journeys in the region are scant.

The study, published in Scientific Reports last November, recorded whale sharks returning to Honda Bay, a key biodiverse marine area in the province of Palawan in the southwestern Philippines, after being spotted in the seascapes of Indonesia and Malaysia.

“This study has revealed the first confirmed international return of whale sharks in Asia with a shark tagged in Honda Bay, Palawan, in July 2017 and tracked to Lahad Datu, Malaysia, returning to Honda Bay less than one year later in May 2018,” Ariana Agustines, one of the authors of the study and project leader for the Large Marine Vertebrates Project (LAMAVE), told Mongabay.

Philippine waters have the second-largest whale shark population in the world after Mexico’s, and Honda Bay is the No. 2 site in the country for these fish to gather. The top spot is Donsol, some 610 kilometers (380 miles) from Honda Bay, which standardized whale shark protection and ecotourism in the late 1990s. 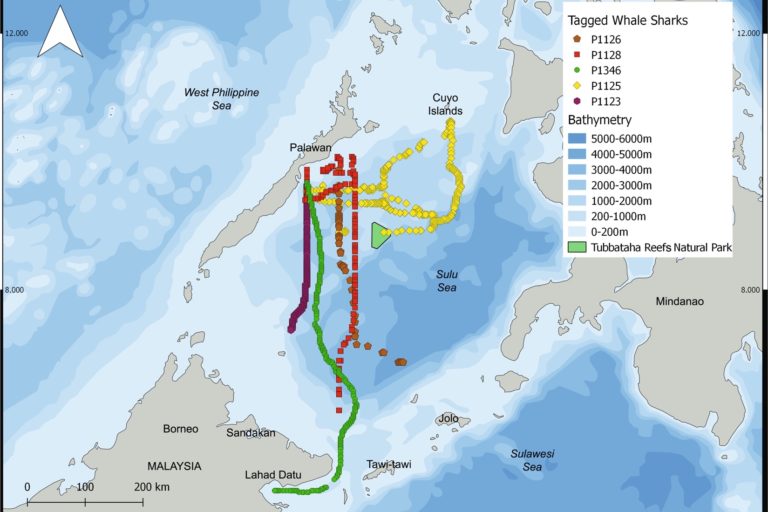 The researchers conducted 159 surveys from April to October 2018 and identified 117 individual whale sharks based on their unique spot patterns, which are spread out like constellations across their bodies.

Whale sharks’ spot patterns are unique to each one like fingerprints are to humans, with no two whale sharks having the exact same pattern, Agustines said. “From this, we are able to build a catalog of whale sharks in a given area and identify new individuals or re-sighted individuals over time,” she said.

The accepted standard visual ID for whale sharks, akin to a human mug shot, is of the animal’s left flank, where the spot pattern is considered unique. Through this side view, biologists are able to differentiate whale sharks from each other.

What was new, however, and eventually filled the gaps of the whale sharks’ Southeast Asian forays, was citizen science: the scientists compared photos or surveys pooled from the general public with their own findings. Through the years, citizen science has shown accurate animal counts, predicted species range, and helped in resource management.

One whale shark, identified as P1346, was spotted in Lahad Datu in Malaysia and then returned to Honda Bay within the same year. In another study published in January by the same group, they identified a whale shark from Cebu, in the central Philippines, moving to Pulau Sipadan off eastern Borneo in Malaysia. 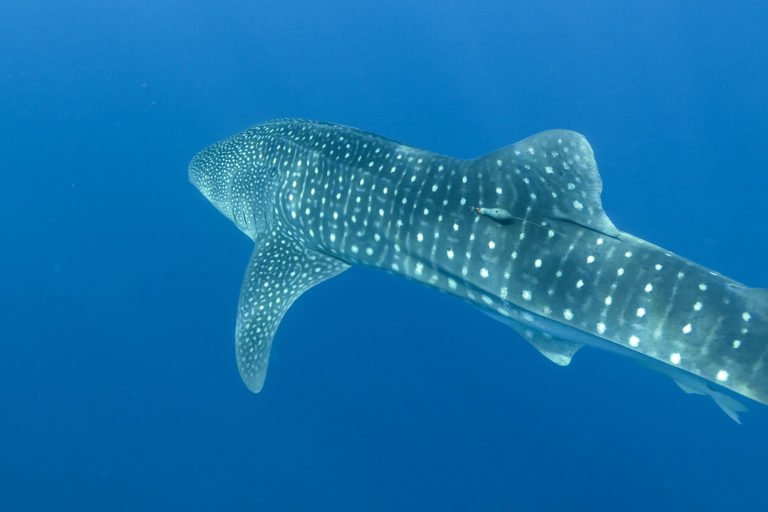 Images of whale shark’s left flank, which shows at least the last gill slit to the base of the first dorsal fin, give scientists ample information to identify and differentiate one whale shark from another. Image by Alessandro Ponzo/LAMAVE

Another whale shark, a 3-meter (10-foot) male identified as ID-051, went further south to East Kalimantan in Indonesian Borneo and was spotted again in Honda Bay after three and a half years. ID-051 was also the first whale shark to be spotted in both Philippine and Indonesian waters using the photo ID technique.

Two other whale sharks were later spotted frolicking in Oslob, the world’s largest whale shark-watching destination in the world, in Cebu, some 500 km (310 mi) from Honda Bay.

The research group also noticed some interesting whale shark behaviors that set this Honda Bay group apart from others in the country. Compared to those found in Southern Leyte and Donsol, the Honda Bay group whale sharks are smaller, ranging from 4 to 8 meters (8-26 feet) in length, are mostly male, and feast on small fish and krill, instead of the usual zooplankton.

“We suspect some whale sharks feed in Honda Bay for a short period of the year, then travel to more productive areas to make the most of the foraging opportunities there and return again to Honda Bay at a later season,” Agustines said.

“It’s important to locate areas where mating or breeding occur to successfully conserve the species because if we are able to protect and monitor these areas, we can readily secure their long-term conservation and at the minimum ensure they are reproducing, and new generations are being born,” Agustines said. 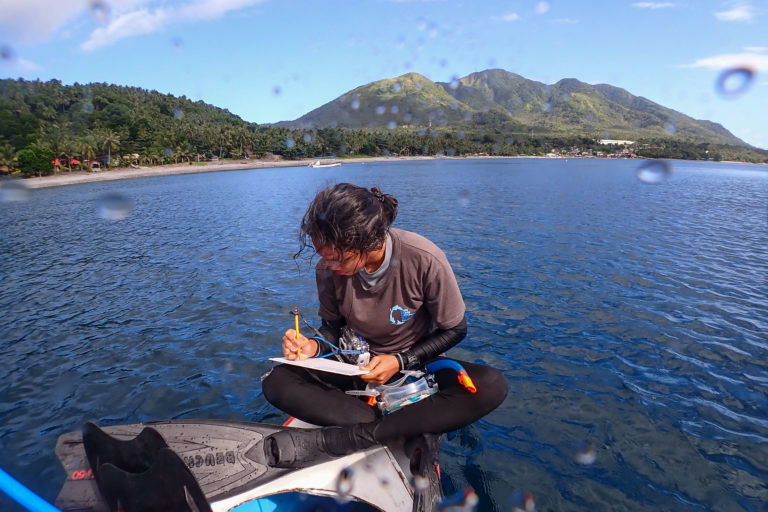 A member of LAMAVE during the whale shark Philippines survey. The group also conducts studies on sea turtles and manta rays. Image by Ariana Agustines/LAMAVE

Whale sharks have been protected by laws in the Philippines since 1998, in Malaysia since 1999 and in Indonesia since 2013. But “threats of illegal targeted fishing remain a concern as whale shark fisheries in the south of China are still in operation,” Agustines said.

These activities could possibly encroach on the Sulu-Sulawesi seascape, a 900,000-square-kilometer (347,000-square-mile) marine area that straddles the waters of Malaysia, Indonesia and the Philippines. Comprising one of the corners of the Pacific Coral Triangle, this seascape is a known hotspot for piracy, poaching and illegal fishing.

“The conservation of the whale shark would benefit greatly from a trilateral collaboration between the Philippines, Malaysia and Indonesia as it would increase awareness for the species, strengthen policies presiding over their management, contribute to essential population monitoring data, and identify and mitigate threats more readily,” Agustines said.