The Indian dragons we know so little about

It was October 2013. Armed with special permission, researcher Dinal Samarasinghe was peering at preserved animal specimens at Kolkata’s Zoological Survey of India. While the ZSI is a repository of thousands of specimens collected from across India, Samarasinghe’s interests lay in a single species of lizard which is a close relative of the well-known Komodo dragon: the Asian water monitor, Varanus salvator. This large semi-aquatic lizard is found across south and southeast Asia, including India and the Andaman and Nicobar islands. The latter are home to two sub-species of water monitor: the Andaman monitor, which dwells only in the Andaman islands, and the Southeast Asian water monitor (Varanus salvator macromaculatus, which you can spot in east and northeast India, the Nicobar islands and several southeastern countries including Myanmar and Indonesia). Samarasinghe wanted to learn more about the physical appearances of the Andaman water monitor to better understand its taxonomy, the physical features that made it a different sub-species.

That’s when he came across an Andaman monitor specimen from Great Nicobar, a region where they had not yet been reported from. 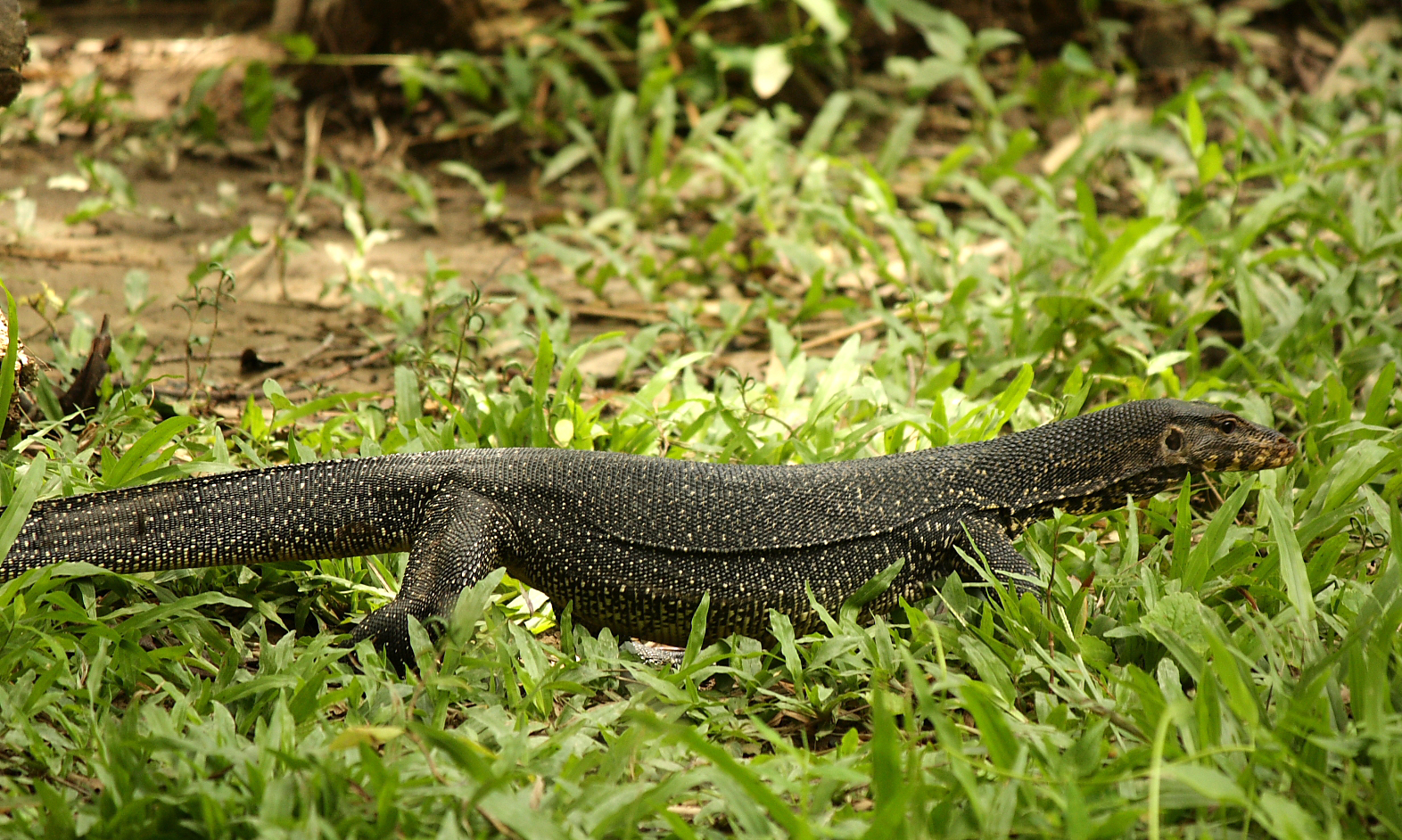 “This prompted us to look closely at the present distribution of water monitor subspecies throughout the Andaman and Nicobar islands,” wrote Samarasinghe who is with Sri Lanka’s Wildlife Research and Nature Conservation Foundation, in an email to Mongabay-India.

Apart from examining ZSI specimens in detail, Samarasinghe and his colleagues also conducted field observations of water monitors in the archipelago. Their results, published this February in Zootaxa, show that the Andaman water monitor is found in not only in the Andaman islands, but also in the southern Nicobar islands. The central and northern Nicobar islands meanwhile, are home to only the southeast Asian water monitor. While the study piques interest in why the two sub-species partition themselves so distinctly in the archipelago, it also shows that there is still much we are yet to learn about India’s dragons, monitor lizards belonging to the family Varanidae.

India is home to four species of Varanus lizards: the Bengal monitor lizard Varanus benghalensis, desert monitor V. griseus, yellow monitor V. flavescens and water monitor V. salvator. Growing to lengths of about two metres, the water monitor is one of the largest reptiles in the world while its terrestrial cousin the Bengal monitor (which can easily clamber up trees too in search of birds’ nests) can also reach a length of around 1.75 metres. Several sub-species – such as the Andaman and southeast Asian water monitors in the Andaman and Nicobar archipelago alone – also exist.

According to herpetologist Varad Giri, there’s a lot to learn from exploring varanid taxonomy. The Bengal monitor, for instance, is seen in many parts of India – from deserts to wet evergreen patches – and it would be worth checking to see if they were all the same, he added.

“The focus would need to be on sampling across known localities, proper sample collection for DNA, addressing any known synonymies by visiting respective type localities, studies of museum specimens and sorting of varanid taxonomy,” he commented. 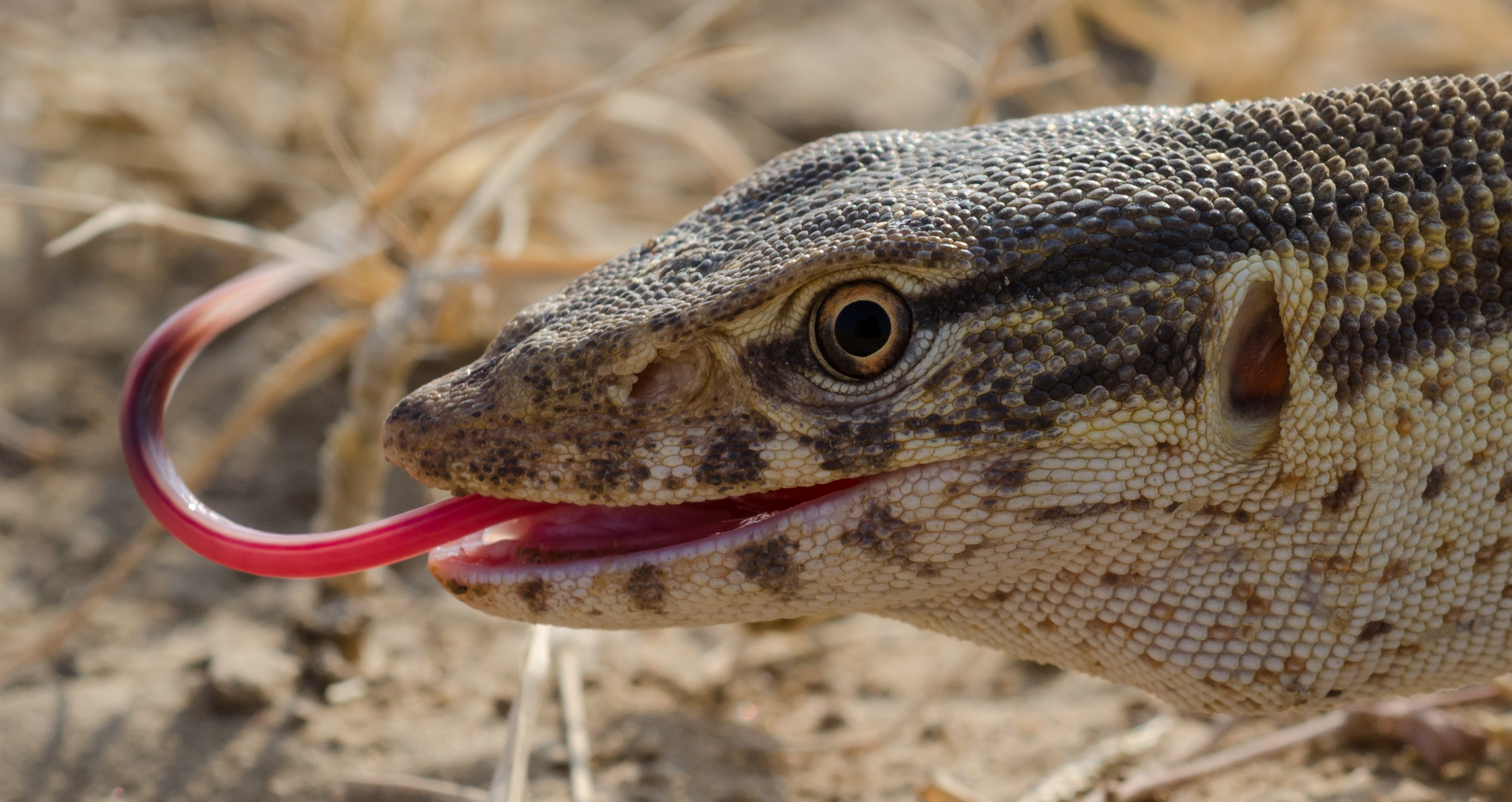 Biologists including famed herpetologist Walter Auffenberg studied some aspects of varanid behaviour (including feeding and combat behaviour in the Bengal monitor), but there still exist gaps in information on both varanid behaviour and ecology in India. All four lizards are listed under Schedule I of India’s Wildlife Protection Act (which makes capturing or poaching these species illegal), but this also complicates the process of studying them, opine some.

“Mega mammal myopia” is also a problem that is making us miss studying important species such as monitor lizards, said scientist Jayaditya Purkayastha, Help Earth (Guwahati). The last time the IUCN Red List evaluated Bengal monitors was in 2009; research is the first component of conservation action and that is missing in the case of India’s varanids, he added.

“Monitor lizards are common but we have very little knowledge about their behaviour and natural history,” wrote Giri, Director, NIDUS and Foundation for Biodiversity Conservation. They are among one of the few lizards that are good burrowers, amazing climbers and agile swimmers; coupled with their size these animals make efficient predators, he added. Juveniles are strikingly different from adults and we don’t know why this ontogenetic colour change exists, he wrote.

What we also don’t have information on are ecological or population-level data on India’s varanids that reflect current landuse changes, said Abhijit Das, scientist at the Wildlife Institute of India (WII), whose team is currently studying varanids. 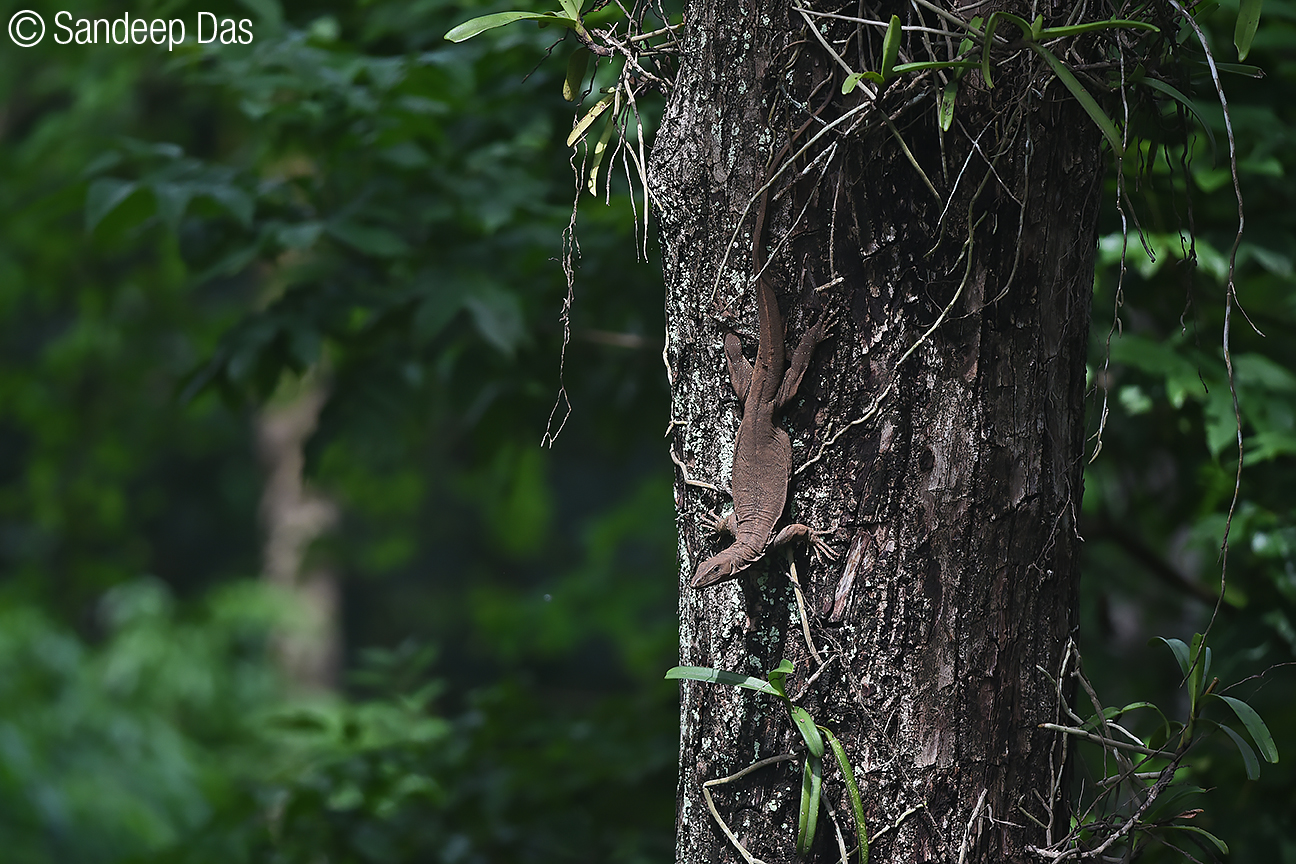 Bengal monitor lizard, an agile climber, is found in many parts of the country. Photo by Sandeep Das.

Poaching for meat and more

But despite the lack of studies, some threats these reptiles face are glaringly obvious. Poaching is a huge worry in many countries where varanids are found. In India too, monitors are hunted for meat, fat and skin; many of these products are used in traditional medicine. The animals’ hemipenes, or male copulatory organs, are also being traded (even in online markets). Unfortunately for varanids, their sex organs resemble the root of a rare central Indian plant Martynia anna (hatha jodi in Hindi) used in tantric Hindu worship and believed to bring good luck.

When scientists including Dr. Sandeep Gupta of the WII’s Wildlife Forensic and Conservation Genetics Cell analysed the DNA of seven samples of hatha jodi procured online (all claimed to be sourced from plant root), they found that all except two samples (which turned out to be plastic) were Bengal monitor hemipenes. Over the last three years alone, at least 300 samples of hemipenes came to WII for identification, said Gupta. This poaching is also why Das’s team is using genetic methods to identify confiscated varanid body parts at the WII and developing a key for state Forest Departments to identify them in field. Studying varanid population genetics too is on the cards.

Though they have not been documented yet local extinctions are also a concern, said Gerard Martin, founder of the Gerry Martin Project that works on reptile research and awareness. Monitors were once common around many parts of Karnataka including Bangalore, Mysore and Hunsur, and were used for meat, skin and oil, he said.

“They are now never seen. These landscapes have also changed in the last two to three decades,” he wrote in an email to Mongabay-India. “Either urbanisation or intensive farming, where rocky outcrops, wide hedges and other microhabitats that monitor lizards used to use, have now been removed to make more room for crops. Water monitors have taken a massive beating from hunting for meat in many places. The Andaman and Nicobar Islands should have these lizards hanging out everywhere, but, they are not often seen; when they are spotted, they make a hasty get away, symptomatic of hunting.”

“They are safe to humans, effective rodent and snake hunters and an integral part of a balanced ecosystem.”

Samarasinghe et al 2020. On the taxonomy and distribution of Varanus salvator andamanensis Deraniyagala, 1944 (Reptilia: Varanidae), including a redescription of the type specimens and a discussion about its allopatric co-occurrence with V. s. macromaculatus on the Nicobar Islands. Zootaxa 4743 (1): 061-074.

Rajpoot et al 2018. Wildlife forensics in battle against veneration frauds in Uttarakhand, India: identification of protected Indian monitor lizard in items available in the local market under the name of Hatha Jodi. Mitochondrial DNA Part B 3 (2): 925-932.