Bats are hosts to a range of viruses but don't get sick – why? 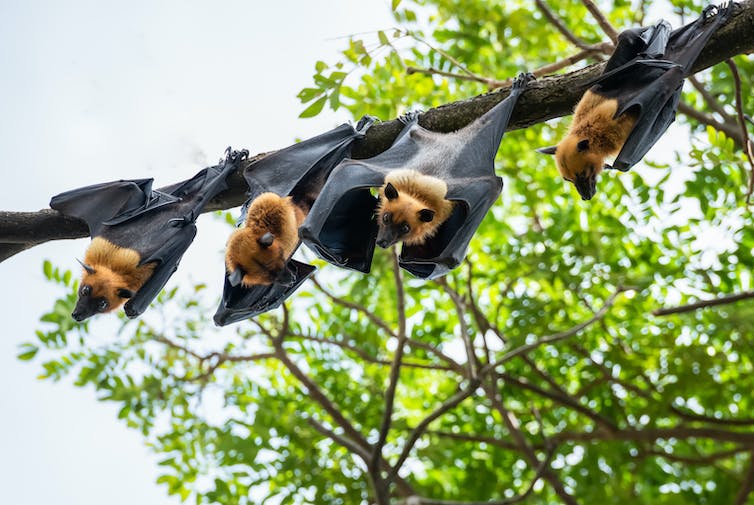 Bats harbour many diverse viruses, including coronaviruses. Indeed, Sars, Mers and COVID-19 – which are all caused by coronaviruses – are thought to have emerged from bats. These diseases can be deadly to humans, yet bats seem to be unaffected by them.

Like all animal species, bats possess their own range of pathogens – viral, bacterial and fungal. Organisms are part of an interconnected system of other living things that evolved to exploit and be exploited in turn. Bats have therefore evolved with a set of viruses that infect them and continuously circulate through the bat population.

SARS-CoV-2, the virus that causes COVID-19 is a member of a family of viruses called the coronaviridae (coronaviruses). Coronaviruses, or “CoVs”, infect a variety of animals, with human infections ranging from HCoV-229E, which causes some cases of the common cold, to MERS-CoV, which is fatal in up to 30% of cases.

Since the original SARS-CoV outbreak in 2002, coronaviruses closely related to SARS-CoV have been discovered in bats from countries all over the world. Scientists in China studying Chinese horseshoe bats in 2013, identified several SARS-like CoVs that use the same ACE2 receptor to bind to cells as the current SARS-CoV-2. These viruses were similar enough to SARS-CoV that they were termed SARS-like coronaviruses. New viruses have been added to this group since then. So there is a significant diversity of coronaviruses circulating in bats, which may increase the probability that one of these viruses has the potential to become a zoonotic infection – in other words, can jump to humans.

Bats are excellent hosts for viruses in general and coronaviruses as a group have been particularly successful at infecting and diversifying within bats. The highly social nature of many bat species leads to the constant exchange of viral pathogens between bats – and this may act to drive viral diversification within a population.

With so many potentially dangerous viruses circulating among them, why do the bats themselves not die off from these constant infections? Clearly, bats can maintain a balance between control of a viral infection and the excessive inflammatory response that can kill other hosts. Perhaps the answer lies in their unique feature among mammals – flight.

The physiological requirements of flight have affected the bat immune system. Flight causes bats to have elevated metabolic functions and raises their core body temperature about 38°C. This means that bats are often in a state that, for humans, would be considered a fever. Researchers in the UK have suggested that this may be a mechanism to help bats survive viral infections. 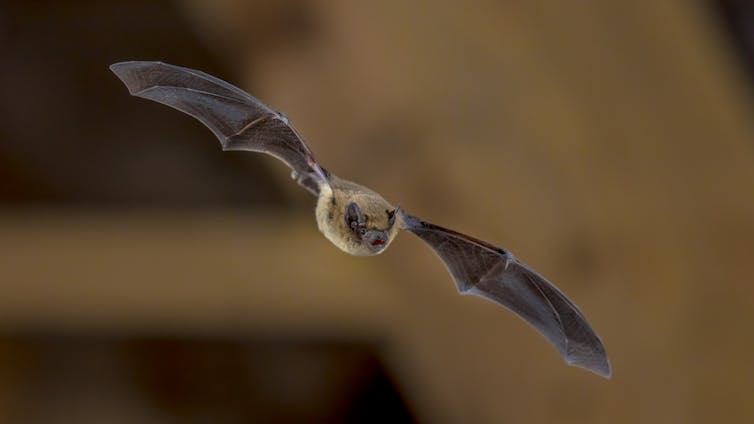 Viral infections can harm the host, in part, by causing an out-of-control inflammation response called a “cytokine storm”, which can be a fatal complication in several respiratory diseases, including COVID-19. If bats adaptation to flight also allows them to tolerate high body temperatures better, it means they can tolerate at least some potential damaging effects of the inflammation response better than other mammals.

In addition to traits that allow bats to tolerate a high body temperature, bats may also have other adaptations that mark their immune system as unusual or unique among mammals.

A sting in the tale

In 2018, scientists in China and Singapore identified a mutation in a gene that helps to control the antiviral response in bats during a viral infection. The mutation is in a gene called the stimulator of interferon genes (STING), which is common to all mammals and has a crucial role in triggering the inflammation response during a viral infection.

The mutation identified in bats has been shown to reduce the production of specific inflammation-causing proteins, called interferons, during a viral infection.

It may seem counter-intuitive that reduced production of an antiviral component could be better for the host, but it appears that damping down the inflammation response may allow the bats to avoid the damage caused an excessive immune response – the previously mentioned cytokine storm.

Adaptation to flight and mutation in STING both serve to control and tolerate inflammation. But these changes are probably only part of how bats have adapted to persistent viral infections in a way that other species have not.

Although we have known for a long time that bats are a potential source of novel viruses, research into bat immunity remains at the cutting edge of science, and new research is emerging all the time. It is likely that further discoveries will be made and that each new piece of data will enhance our understanding of bats, viruses and provide insights into our own immune systems.