A French high school teacher who had shown caricatures of the Prophet Muhammad to his class was beheaded on Oct. 16 by an 18-year-old Muslim refugee in what France’s President Emmanuel Macron characterized as an “Islamist terrorist attack.”

The killing is the latest high-profile attack by a Muslim extremist in France, coming after the 2015 massacre at Charlie Hebdo magazine and the 2016 truck attack in Nice. It also occurred two weeks after Macron gave a controversial speech defining Islam as “a religion that is in crisis today all over the world.”

France, which colonized many Muslim-majority territories in Africa and the Levant in the 19th and 20th centuries, such as Algeria and Mali, has Western Europe’s largest Muslim minority – 6 million people, or 9% of its population.

Macron’s Oct. 2 speech outlined a legislative proposal to fight “Islamist separatism.” If passed in Parliament, it would essentially ban home-schooling of all children aged 3 and up and prevent foreign-trained imams from leading French mosques. The goal, said the president, is “to build an Islam in France that can be compatible with the Enlightenment.”

Macron’s analysis concludes, simply, that Islam is somehow at odds with modern Western society. But my research on state secularism and religion shows that the reality is much more complicated. 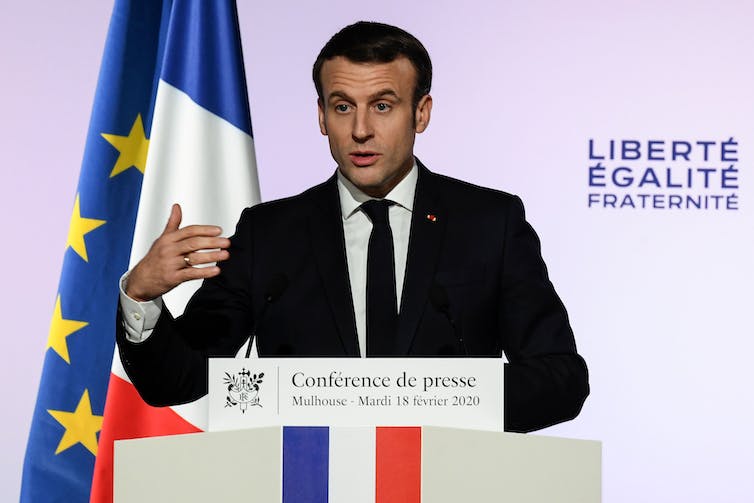 French secularism, which is embraced by both the progressive left and the Islamophobic right, goes well beyond the American democratic concept of separating religion and state. Called “laïcité,” it essentially excludes religious symbols from public institutions. France has banned Muslim women’s headscarves in schools and outlawed religious face coverings everywhere. There are no such bans in the United States.

While both America and France have ongoing debates about “Islamic fundamentalism” and “Muslim terrorists” and views that can be defined as Islamophobic have some popular support, American democracy generally provides better opportunities for the integration of various religious groups.

In France, the Constitution defines the state only as secular, without delineating the boundaries of that secularism. In the United States, the First Amendment restricts the secular state’s engagement with religion, saying the government can neither establish a religion nor prohibit a religion’s free exercise.

It would be difficult for the U.S. to announce, as Macron did, a state-sponsored project to “forge a type of Enlightenment Islam.” 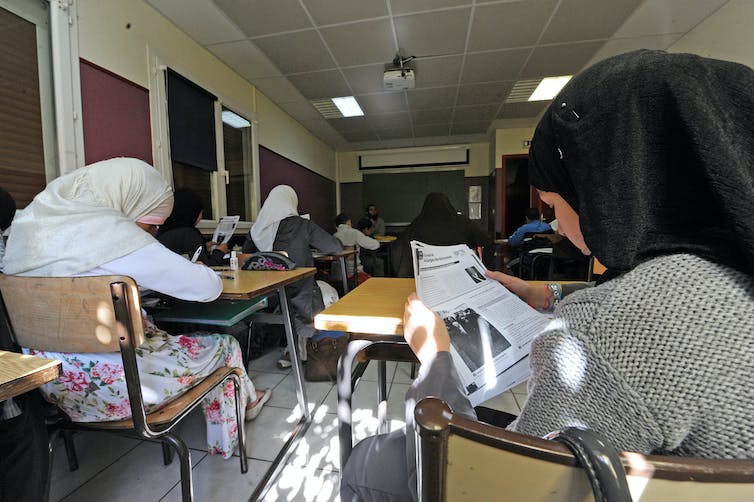 In France, Muslim girls may wear headscarves in Islamic private schools like the Alif school in Toulouse, but not in public schools. Eric Cabanis/AFP via Getty Images

Indeed, 11 years before Macron voiced his provocative view, U.S. President Barack Obama gave a famous speech on Islam in Egypt in 2009, attempting to reset the relationship between America and the Muslim world.

Emphasizing Muslims’ contributions to American society, Obama said, “It is important for Western countries to avoid impeding Muslim citizens from practicing religion as they see fit – for instance, by dictating what clothes a Muslim woman should wear.”

French secularism sees no hyphenated identities – only French or Not French.

Islam and the secular state

Some in France also see this rigid secularism as unequal to the challenges of multiculturalism and migration. The eminent scholar Jean Bauberot, for example, defends a more “pluralistic secularism” – one that tolerates certain religious symbols in public institutions.

France has in fact made many exceptions for Catholics. The government provides substantial public funding to private Catholic schools, which educate about a quarter of all K-12 students, and six of 11 official holidays in France are Catholic holidays.

Too often, laïcité translates into an unwillingness to accommodate the religiously based demands of Muslims.

In 2015, a Muslim advocacy organization sued a municipal authority in France’s Burgundy region for refusing to offer an alternative to pork in public school cafeterias. The court compelled the town to reverse its policy, but not because it violated religious freedom. The court found the menu violated the children’s rights.

France’s founding commitment to equality under the law likewise forestalls meaningful social debate on racial discrimination; its census does not even collect information on race. Although France’s biggest minority is mostly composed of nonwhite Muslim immigrants from its former colonies in Africa and their descendents, Macron’s speech referenced only in passing to French colonialism.

That said, I find some truth in Macron’s speech. But the “crisis” facing Islam lies in the historical and political failings of the Muslim world, not in the religion itself.

These laws, which block freedom of expression, are more rooted in the interests of the conservative clergy and authoritarian rulers than in the Islamic faith, my research shows. They actually contradict several Quranic verses that urge Muslims not to coerce or retaliate against people of other faiths.

Still, in Western countries where Muslims are a minority, extremists occasionally take it upon themselves to punish those who, in their view, mock the Prophet Muhammad. That has caused global controversies over cartoons and movies. At times, in France and beyond, it has led to an unacceptable outcome: murder.

Such killings, whether perpetrated by the state or by individuals, are tragedies. But to frame them as a purely religious problem ignores the socioeconomic and political origins of Islamic blasphemy laws, and the anti-democratic cultural consequences of authoritarianism in many Muslim countries.

It also overlooks the difficult reality that social alienation is an underlying factor in the radicalization of some young Muslims in the West.

Macron’s speech made some gestures toward greater inclusion.

“I want France to become a country where we can teach the thoughts of Averreos and Ibn Khaldun,” he said, referencing two eminent Muslim thinkers of the 12th and 14th centuries, and envisioned “a country that excels in the study of Muslim civilizations.”

That plural in “civilizations” is meaningful. It acknowledges that Islam is not monolithic. Neither is French secularism. Both are complex systems with varied interpretations.

In truth, Macron doesn’t need to “build an Islam in France that can be compatible with the Enlightenment,” because that already exists. Whether French secularism can adapt to Islam is another question.