Coronavirus: Is the cure worse than the disease? The most divisive question of 2020

In 1968, at the height of the last great influenza pandemic, at least a million people worldwide died, including 100,000 Americans. That year A.M.M. Payne, a professor of epidemiology at Yale University, wrote:

In the conquest of Mount Everest anything less than 100% success is failure, but in most communicable diseases we are not faced with the attainment of such absolute goals, but rather with trying to reduce the problem to tolerable levels, as quickly as possible, within the limits of available resources…

That message is worth repeating because the schism between those seeking “absolute goals” versus those seeking “tolerable levels” is very much evident in the current pandemic. On September 21, the BMJ reported that opinion among UK scientists is divided as to whether it is better to focus on protecting those most at risk of severe COVID, or imposing lockdown for all.

One group of 40 scientists wrote a letter to the chief medical officers of the UK suggesting that they should aim to “suppress the virus across the entire population”.

In another letter, a group of 28 scientists suggested that “the large variation in risk by age and health status suggests that the harm caused by uniform policies (that apply to all persons) will outweigh the benefits”. Instead, they called for a “targeted and evidence-based approach to the COVID-19 policy response”.

A week later, science writer Stephen Buranyi wrote a piece for the Guardian arguing that the positions in the letter with 28 authors represent those of a small minority of scientists. “The overwhelming scientific consensus still lies with a general lockdown,” he claimed.

A few days later, over 60 doctors wrote another letter saying: “We are concerned due to mounting data and real world experience, that the one-track response threatens more lives and livelihoods than Covid-lives saved.”

This back and forth will undoubtedly continue for some time yet, although those involved will hopefully begin to see opposing scientific views and opinions as a gift and an opportunity to be sceptical and learn, rather than as a “rival camp”.

There are issues, such as global warming, where there is scientific consensus. But consensuses take decades, and COVID-19 is a new disease. Uncontrolled experiments in lockdown are still ongoing, and the long-term costs and benefits are not yet known. I very much doubt that most scientists in the UK have a settled view on whether pub gardens or universities campuses should be closed or not. People I talk to have a range of opinions: from those who accept that the disease is now endemic, to those who wonder if it can still be eradicated.

Some suggest that any epidemiologist who does not toe a particular line is suspect, or has not done enough modelling and that their views should not carry much weight. They go on to dismiss the views of other scientists and non-scientist academics as irrelevant. But science is not a dogma, and views often need to be modified in the light of increasing knowledge and experience. I am a geographer, so I am used to seeing such games of academic hierarchy played above me, but I do worry when people resort to insulting their colleagues rather than admit that knowledge and circumstance have changed and reappraisal is necessary.

Is the cure worse than the disease? This is the question that currently divides us, so it is worth considering how it might be answered. We would have to know how many people would die of other causes, for example, of suicide (including child suicides) that would not have otherwise occurred, or liver disease from the increase in alcohol consumption, from cancers that were not diagnosed or treated, to determine the point at which particular policies were taking more lives than they were saving. And then what value should you put on those lost or damaged lives against the economic consequences?

We do not live in a perfect world with perfect data. For children, for whom the risk of death from COVID is almost zero and the risks of long-term effects are thought to be very low, it is easier to weigh up the negative effects of not going to school or of being trapped in households with rising domestic abuse.

For university students, who are mostly young, a similar set of calculations could be made, including estimating the “cost” of having the infection now, versus the cost of having it later, possibly when the student is with their older relatives at Christmas. With older people, though, the calculus – even in a perfect world – would become increasingly complex. When you are very old and have very little time left, what risks would you be willing to take? One elderly man famously claimed: “No pleasure is worth giving up for the sake of two more years in a geriatric home in Weston-super-Mare.” 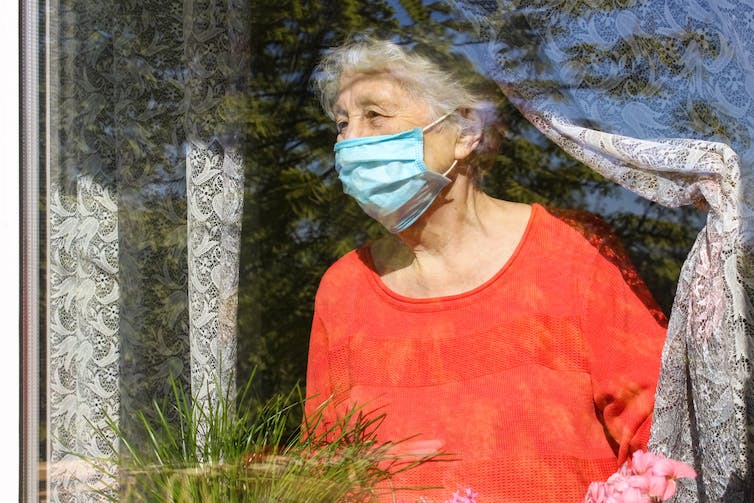 Safety, but at what cost? Solarisys/Shutterstock

A recent paper, published in Nature, suggests that even in Hong Kong, where compliance with mask-wearing has been over 98% since February, local elimination of COVID is not possible. If it is not possible there, it may not be possible anywhere.

On the brighter side, elsewhere, elderly people have been protected even when transmission rates are high and overall resources are low. In India, a recent study found that “it is plausible that stringent stay-at-home orders for older Indian adults, coupled with delivery of essentials through social welfare programs and regular community health worker interactions, contributed to lower exposure to infection within this age group in Tamil Nadu and Andhra Pradesh.”

However, minimising mortality is not the only goal. For those who don’t die, the outcome can still be prolonged and severe debility. That, too, must be taken into account. But unless you are sure that a particular measure for locking down will do more good than harm, in the round, you should not do it. In 1970, shortly before he became dean of the London School of Hygiene and Tropical Medicine, C.E. Gordon Smith wrote:

The essential prerequisite of all good public health measures is that careful estimates should be made of their advantages and disadvantages, for both the individual and the community, and that they should be implemented only when there is a significant balance of advantage. In general, this ethic has been a sound basis for decision in most past situations in the developed world although, as we contemplate the control of milder diseases, quite different considerations such as the convenience or productivity of industry are being brought into these assessments.

Current beliefs of where the balance of advantages and disadvantages lie are changing. The “rival camps” rhetoric needs to end. No individual or small group represents the view of the majority. This article is republished from The Conversation under a Creative Commons license. Read the original article.