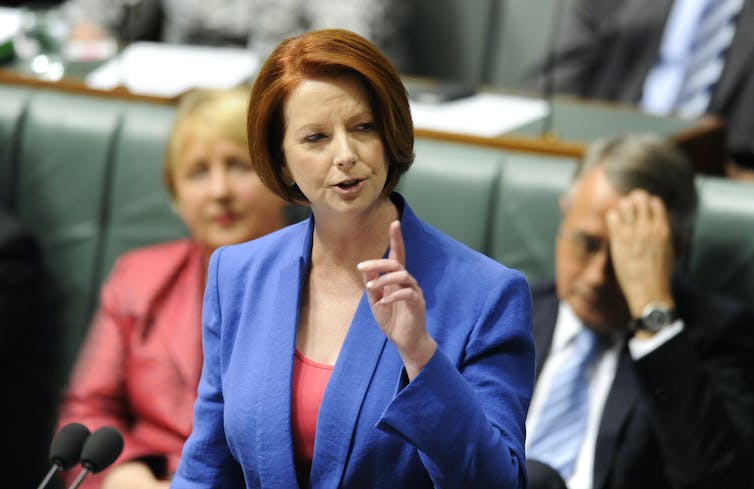 When Julia Gillard was sworn into office as Australia’s first female prime minister on a chilly Canberra morning in 2010, it seemed like the ultimate glass ceiling had been smashed.

But this momentous occasion was marred by the onslaught of sexism and misogyny Gillard endured from the opposition, and especially the mainstream media, over the next three years of her term.

Since she lost the prime ministership in 2013, Gillard has fostered a legacy that extends beyond parliamentary politics, with a focus on women’s rights, education and mental health.

The two Es: education and equality

Born in Wales in 1961, Gillard’s family moved to Australia in 1966. She grew up in Adelaide as the daughter of a nurse and aged care worker.

She told the Harvard Business Review last year her involvement in the student movement, protesting education cutbacks, was a formative experience:

That’s what spurred an activism and engagement in public policy in me, and I went on to lead the student movement nationally … people had said, ‘You really should consider politics’. It was a slow dawning over time that it would be a fantastic way of putting my values into action — and realising that someone like me could do it.

Graduating with an arts/law degree, Gillard joined law firm Slater & Gordon in 1987 and was a partner by 1990.

While she has said she felt “quite at home in many ways” as a young woman in the “larrakin” culture of the law firm, she also worked on affirmative action campaigns in the 1990s. She was a founding member of Labor women’s support network, EMILY’s List Australia.

She continues to maintain this focus on gender and education in her post-politics advocacy.

Gillard was elected to federal parliament in 1998 and was a frontbencher by 2001. In 2007, with Labor’s election victory, she became deputy prime minister and minister for education, workplace relations and social inclusion. 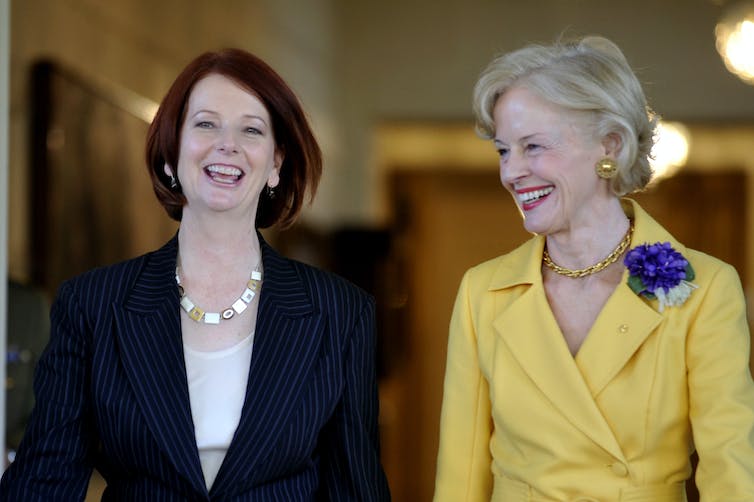 However, despite the popularity of prime minister Kevin Rudd, the Labor party became increasingly frustrated with his leadership style ahead of the 2010 federal election.

These tensions saw Gillard challenge Rudd for the top job in June 2010, in one of the most dramatic episodes in recent Australian political history.

Gillard’s unexpected promotion would have lasting consequences for her, the Labor Party and Australian political culture.

It initiated a “coup culture” in Australian politics, where a series of challenges saw the removal of four out of the five most recent prime ministers.

The unprecedented removal of a popular first-term prime minister during an election year also prompted an overwhelming backlash from the opposition, the media and the public.

Gillard faced accusations of disloyalty that marred the historic significance of her victory and status as the “first woman”. It also unleashed what seemed like a ceaseless tirade of sexism and misogyny that she endured for the next three years of her term.

The more prominent examples include broadcaster Alan Jones saying Gillard should be put in a “chaff bag” and taken “out to sea”. A menu at a Liberal National Party fundraiser described a dish as “Julia Gillard Kentucky Fried Quail – small breasts, huge thighs and a big red box”. 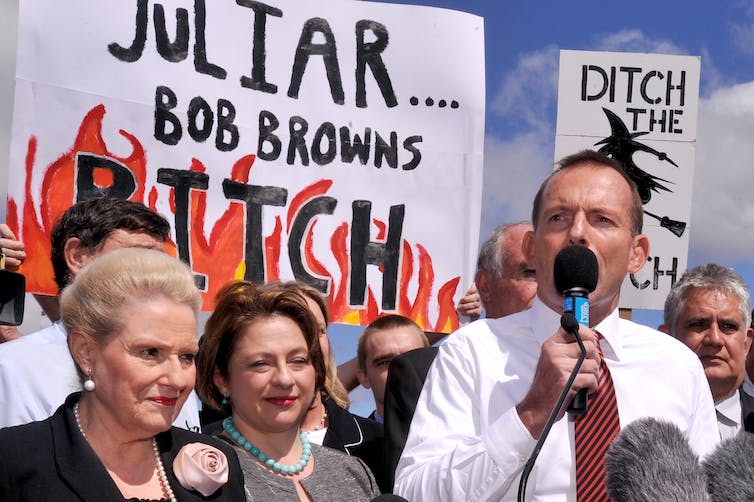 After the 2010 federal election, Gillard had to work with a minority government.

But in a sign of her formidable negotiating skills, Gillard’s term as prime minister was extremely productive.

Despite the surrounding political turmoil, 570 bills were passed by the Senate, with key achievements including the National Disability Insurance Scheme, the child abuse royal commission, a carbon price, education funding and paid parental leave.

It wasn’t all warm and fuzzy

Yet not all Gillard’s policies are so fondly remembered.

On the same day Gillard delivered her famous “misogyny speech”, her government passed welfare reforms that moved single parents off the parenting payment and onto Newstart (now called JobSeeker Payment). This reduced people’s payments by $60 to $100 a week, disproportionately affecting women.

‘I will not be lectured by this man’

I will not be lectured about sexism and misogyny by this man.

This statement launched a blistering 15-minute speech, in which Gillard called out the sexism and hypocrisy of Abbott during Question Time in October 2012.

The anger and frustration she felt about Abbott – known for his sexist sentiments – and the systemic double standards she’d endured for years, resonated with women around the world.

Though it was initially critiqued by the Canberra Press Gallery, which accused Gillard of “playing the gender card”, the speech went viral.

It has become the definitive moment of her prime ministership and is often the only thing people overseas know about Australian politics.

Earlier this year, it was voted the “most unforgettable” moment in Australian TV history by a Guardian Australia poll. Last month, a senior advisor to former-US President Barack Obama revealed they often watched the speech whenever they were frustrated with then-prime minister Abbott.

The misogyny speech has even entered into the pop cultural canon, inspiring young women today to create memes and TikToks paying homage to those famous words.

Changing the way we talk about sexism and politics

Gillard’s misogyny speech and her time as our first woman prime minister changed the way that politics and sexism were talked about in Australia and highlighted the toxic nature of parliament.

Rather than “playing the gender card”, Gillard drew attention to it, calling out the sexism and misogyny that many women in politics had to silently endure. 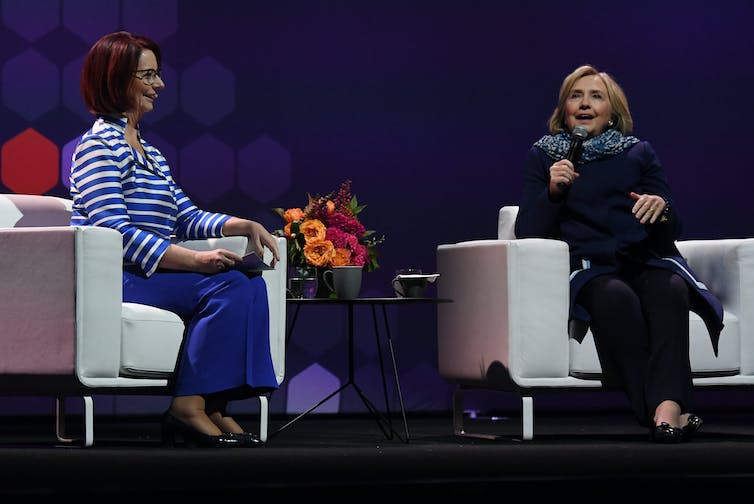 Speaking with Gillard last year in preparation for my doctoral research, she noted how the conversation around gender and sexism is “everywhere now”, and that people are far more aware of and likely to challenge gendered double-standards.

Post-politics: ‘what would Julia do?’

Gillard lost the Labor leadership in 2013, when Rudd got his revenge and his old job back. 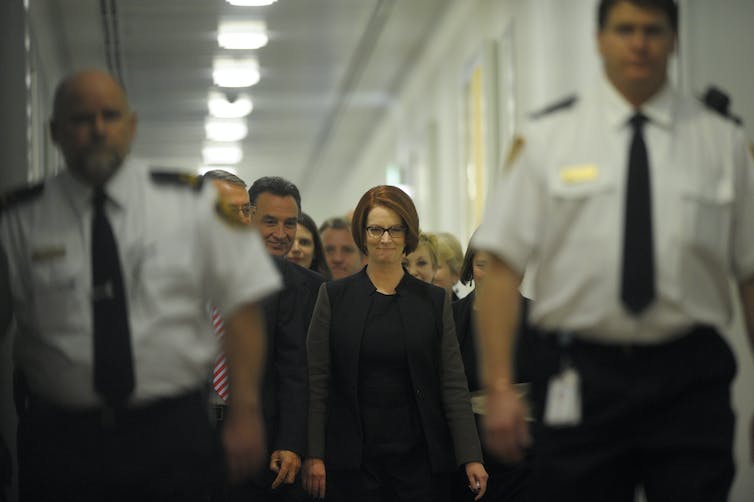 But she has left a lasting legacy as a role model for girls and young women. This stems not just from her political career, but for the way she has gracefully moved on.

Since leaving politics, Gillard continues to work in the areas she cares about, with high-profile appointments in education, mental health and women’s leadership. Earlier this month, she was also appointed as the next chair of medical research giant, the Wellcome Trust. 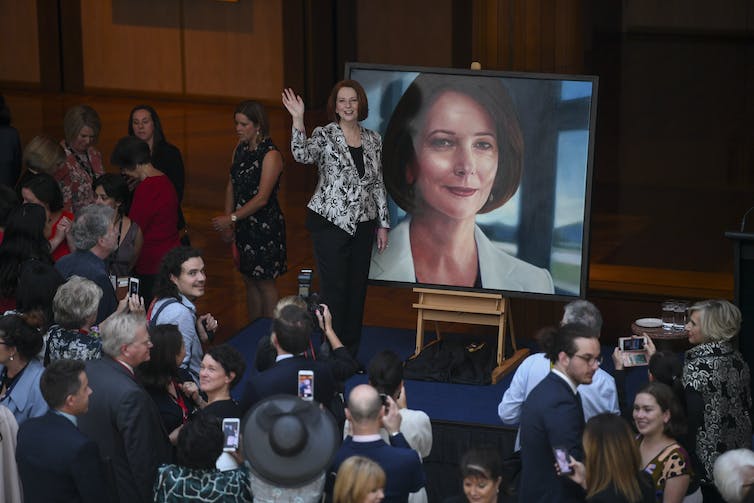 Like all politicians, she’ll continue to have her critics, but her post-political life and demeanour has largely been admired. Gillard’s former foe, Abbott, even attended the 2018 unveiling of her official portrait.

And her career continues to resonate with people, particularly women.

This was recently seen when she received a handwritten note from a stranger on a flight, which thanked her for being “such a strong, intelligent and unapologetic role model for myself and so many of my peers”.

The note added that the author and her female colleagues used the phrase “WWJD” or “what would Julia do”.

As the woman explained: “It’s our rallying cry to be the absolute best at our jobs”.