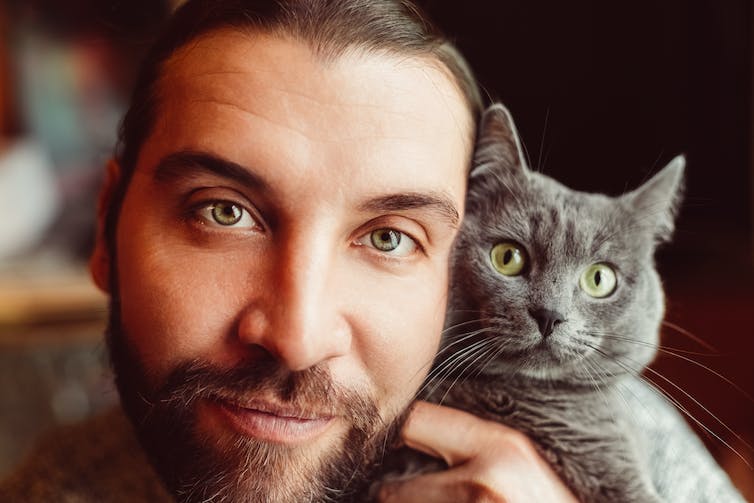 These photos don’t just relay attractiveness; a recent study suggested that 43% of people think they can get a sense of someone’s personality by their picture. You might guess that someone who has included a photo of themselves hiking is an outdoorsy type of person.

But as scientists who study human-animal interactions, we wanted to know what this meant for pet owners – in particular, male cat owners.

If you’re a guy who owns a cat, what kind of effect does it have on suitors if you post a picture posing with your favorite feline?

Prior studies suggested that women do judge a potential male partner based on whether he has pets. While they favor men with dogs, the results showed that they also give men with cats an edge over non-pet owners.

Because of this, we reasoned that men pictured with cats would probably be viewed as more attractive and desirable than men who didn’t pose with any animals.

In our study, we recruited 1,388 heterosexual American women from 18 to 24 years old to take a short anonymous online survey. In the survey, we presented them with photos of one of two young white men in their early 20s either posing alone or with a cat. To avoid biasing the women’s responses, we randomly presented which photo they saw first. Each participant only rated one man, with and without a cat.

Each time the participants saw a photo, we asked them to rate the man pictured on several personality attributes, including his masculinity, femininity and dateability. We also asked the women if they defined themselves as a “cat person,” “dog person,” “neither” or “both.” 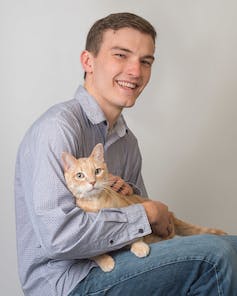 An example of one of the photographs used in the study. Shelly Volsche and Lori Kagan, Author provided

Most of the women found the men holding cats to be less dateable. This result surprised us, since previous studies had shown that women found men with pets to have higher potential as partners. They also thought the men holding cats were less extroverted and more neurotic, agreeable and open. Importantly, they saw these men as less masculine, too.

This last point may explain our findings.

Prior research suggests that women often seek masculine men – both in terms of physical appearance and behaviors. So the fact that women in our study found the photo of the man alone more masculine and more dateable supports the idea that women are likely to look first for clues related to masculinity when determining dateability.

We suspect old cultural norms may be playing a role in the responses. Past research suggests that male femininity and homosexuality are still perceived to be connected. Since cats are sometimes associated more closely with female owners – and therefore, considered a feminine pet – posing with cats may have primed the women taking our survey to default to this outdated trope, despite some popular media efforts to elevate the status of male cat owners.

Alternatively, the perception of male cat owners as less extroverted and more neurotic, agreeable and open may have nudged our respondents to put these men in the “friend zone.” In other words, perhaps seeing a man pose with the cat suggests he might be a better confidant than date.

It’s important to note that whether the women identified themselves as “cat people,” “dog people,” “both” or “neither” affected their perceptions. Women who self-identified as “cat people” were more inclined to view the men pictured with cats as more dateable or say they had no preference.

Of course, like any research, our work has its limitations. Our sample is a very specific population – heterosexual, primarily white women, aged 18 to 24 years and living in the United States. We don’t know how these results would change if we surveyed, say, bisexual or gender-fluid women, men interested in men or individuals from different cultural backgrounds.

And that’s the best part. This is a new, growing area of research, and it’s only one of a handful of potential studies on the relationship between pet ownership and first impressions on dating apps. This means we have our work cut out for us.

But in the meantime, if heterosexual men are looking to get a match, it’s probably a good idea if they save showing off their photos with their favorite felines for the first or second date.